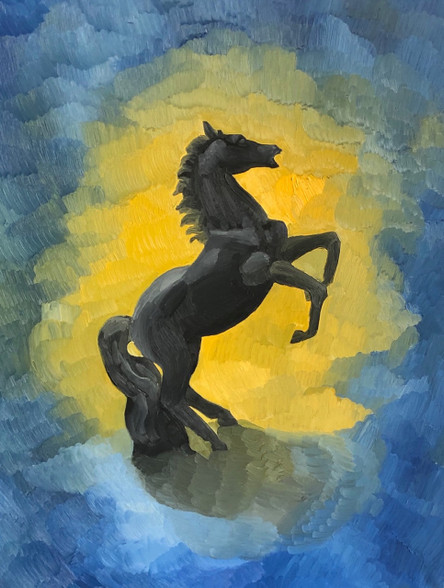 My pieces always reflect the struggle between light and dark. Although I suppose it is always the case that in life, the struggle always continues, on the canvas, the conflict is resolved, and each piece is a victory. Bringing out what is inside, there are times I even feel that painting allows this victory to become a reality. Nothing exists until it exists on a canvas.

As an adolescent, I grew up in Central New York, and learned to paint starting in high school. After high school, however, I stopped painting when I went to University of California Berkeley to study mathematics. I graduated from an undergraduate program in 2004 in pure mathematics. After undergrad, I moved to Japan for 6 months, working for the National Institute of Genomics. I then returned to the States, studying computational biology in graduate school at Duke University. I graduated in 2010 with a PhD from the Computational Biology and Bioinformatics program. I then worked as a postdoc both in Denver, Colorado, as well as University of Illinois Urbana Champaign. It was during this time that my dissociative identity disorder transpired. I stopped going to work, and soon became homeless. I was homeless in Urbana-Champaign for a couple of years. Eventually, I returned to the university, working in IT for about a year. Eventually, my dissociative identity disorder became a concern, and I moved up to Evanston to receive treatment. I am now writing a probability and statistics book, and work as a professional artist.
--Daigoro

This product hasn't received any reviews yet. Be the first to review this product!

All prices are in USD. © 2020 TremainART. Sitemap | Shopping Cart Software by BigCommerce